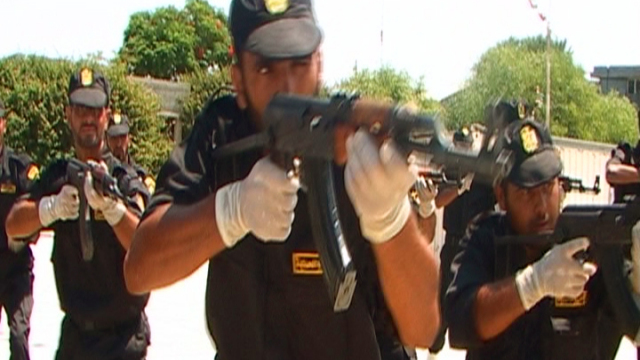 With Hamas accusing Fatah of using 'insurgency tactics' in Gaza, relations between the two factions are at a new low. Gaza is being strangled as both sides continue to blame and provoke the other.

Unaware they're being filmed, Hamas members in Gaza beat and arrest Fatah supporters. Over in the West Bank, a Hamas sympathiser displays his Fatah-inflicted bruises. "Both my hands were injured. It went on for days". There are now two rival Palestinian governments. Gaza's borders have been closed and an economic blockade imposed. At the children's hospital, patients are feeling the affect. They can no longer travel abroad for treatment and there are no drugs in Gaza to treat them. In contrast, in the West Bank, funding is flooding in. The US is anxious to show Palestinians they'll be rewarded for turning away from Hamas. But Hamas claims it only took over Gaza because America was helping Fatah overturn the election results. "Fatah was preparing for a coup in Gaza with the help and support of the American government". Surprisingly, Efraima Helevy, former director of Mossad, agrees. "They decided to take steps to undo the results of the election". If this was the plan, it backfired. There are now effectively two Palestines. And as Hamas and Fatah continue fighting, long suffering Gazans look on in despair.
FULL SYNOPSIS
TRANSCRIPT