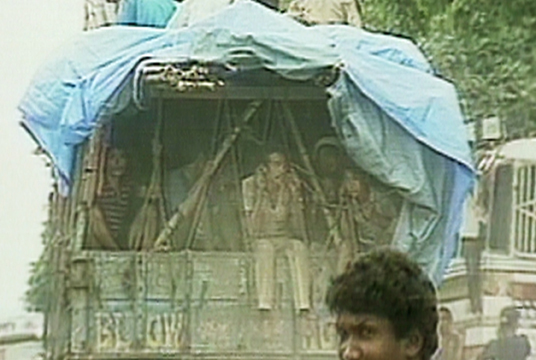 Why did India open fire on thousands of Bhutanese refugees, trying to cross peacefully into India on their way home? This investigation includes rare footage of the shooting.

Shouting "Bhutan is our homeland", thousands of refugees attempt to stream across the Nepal-India border to go home to Bhutan. But the area is soon flooded with Indian security guards and shots ring out. Two people are killed and hundreds wounded. These Hindu refugees are descendents from the Nepalese who settled in Bhutan centuries ago. But most of the population of Bhutan are Buddhist. In 1990, the King suddenly withdrew the Hindus' citizenship and forced them out. India allowed them safe passage to reach Nepal but now refuses to let them return to Bhutan. As one man laments: "We are living a life that is worse than that of animals".
FULL SYNOPSIS
TRANSCRIPT