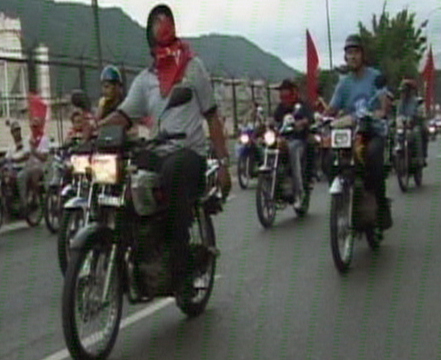 Opposition groups accuse Chavez of using armed biker gangs to intimidate and harass them. They claim that under controversial new reforms, these gangs could become an official arm of government.

Wednesday night in Caracas. Shouting slogans like "Long Live the President!", hundreds of bikers race around the capital. "The bikers are just there to intimidate us. To make sure we don't come out and protest", complains one opposition supporter. The right wing has been invigorated by Chavez's controversial plans to push through constitutional reforms. "These changes would virtually legalize a dictatorship", claims the Mayor of Chacao. Every day, there are demonstrations against the new constitution. But as soon as the protests begin, the bikers turn up to disrupt them. "No one ever cared about us before this President", states one. "People will fight not to give up what they got from him".
FULL SYNOPSIS
TRANSCRIPT