This heartbreaking and visually breathtaking film follows women selling sex from the cold, lonely streets of Europe to the blistering villages in Africa they can never again call home 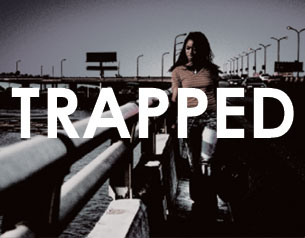 Each year an estimated 2 million women and children are tricked, beaten, raped and forced by threat of death into the world's growing sex industry. This heartbreaking and visually breathtaking film follows women selling sex from the cold, lonely streets of Europe to the blistering villages in Africa they can never again call home. If you only watch one film this year, make it this one.

"You can run, but you can't hide" say the girls, who night after night sell themselves to an endless stream of men. In filthy brothels or parked cars they ply their soulless trade. Street fights are common, as desperate girls steal money from clients to help pay their debts. This film captures first hand the violence and eeriness of life working on the streets. Michelle Mildwater specializes in trauma. Her exceptional sensitivity allows two women - Anna and Joy - to tell their horrific stories. In the glaring light of a refugee prison we meet Joy, trafficked to Europe where she was imprisoned for fraud. When Joy gives up her hopeless quest for asylum and is deported back to Nigeria, we follow her back to the steaming slums of Lagos. Anna was trafficked from her village in Nigeria to Europe by trusted next door neighbours. When she finally arrived she was locked in a flat with five other Nigerian women under the control of a Madam, who stole her passport and told her she owed 60,000 euros. Anna was forced into prostitution to start repaying this debt, and when she tried to run away, Russian thugs nearly beat her to death. Through her tears Anna tells us "I went with one man to his place. When I got there, it was eight of them. They all go round and sleep with me. I can call that rape. But I was so scared to go to the police because if I went to the police, they would send me back to Africa". Michelle travels to Africa to find out for herself why these women are so scared to go back. Shockingly, in every village mothers try to give her their young girls to take to back to Europe. One woman says her daughters are in Europe doing "hairdressing, fashion design. Because they have gone to the white man's land, we are happy". Michelle draws another conclusion: "Here in the villages the truth is never told. Everyone wants to retain the illusion, that Europe is a paradise. And that their daughters are earning money doing some kind of really fancy job". Michelle meets up with Anna again. She is on the run. The traffickers have beaten her mother poured boiling water on her father, saying they will kill her parents if Anna doesn't go back to prostitution in Europe. Anna is also terrified by the voodoo rituals the traffickers forced her to take part in. She had to eat live chicken and the voodoo priest took her hair and blood. Women's rights worker Bisi Olateru-olagbegi explains this powerful ritual: "When somebody is holding your body parts that person has some connection with you. It's like poison. That makes the girls so afraid of renouncing the traffickers, because the repercussions of oath breaking are death and madness". The film ends with Anna pleading on the phone with her own mother not to make her go back into prostitution. "Ten people will fuck you and at the end you get no money. All the pain. "No" I say. I don't want to work on the street anymore. It's not for me".
FULL SYNOPSIS