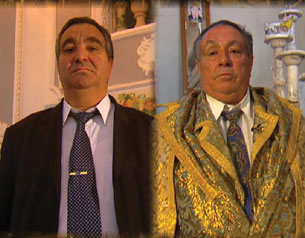 Meet the rival monarchs of the gypsies. Florin Cioba claims he's King of the Roma. But try telling that to his cousin - Emperor of all Roma Everywhere.

"I am the greatest leader. This is what everyone will say", declares Emperor Iulian Radulescu. His dispute with cousin and rival claimant, King Florin Cioba has descended to the level of personal slurs. "I've told him three or four times to go to the mental health institute". But it's a squabble that has little impact on the lives of ordinary Roma, arguably the most discriminated against group in Europe.
FULL SYNOPSIS
TRANSCRIPT