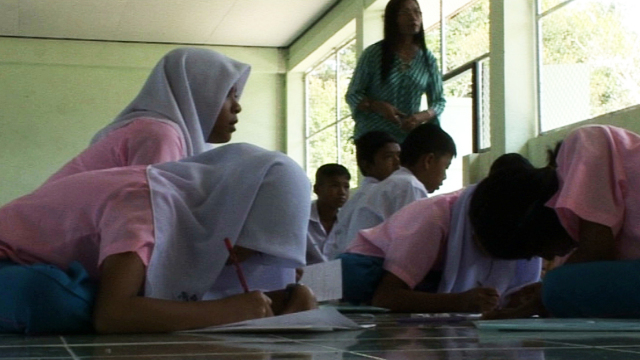 The teachers at this government school are Buddhist, the students Muslim. And they're hoping to inspire their pupils - and their loyalty to the state - with nationalistic songs in praise of Thailand.

Class is over for the day and it's time for a sing along. On the surface, at least, it's a harmonious picture. But behind the smiles there's another story. Teachers and pupils alike live in real fear of insurgents who are armed with a very different kind of message. "A teacher at a school near here was shot dead right in front of his class. He was still holding a piece of chalk when he fell down dead," says one child. Almost 80 teachers have now died in the last few years since schools like this one became a target for insurgents. The authorities are now faced with the challenge of adapting to these unorthodox and disruptive tactics.
FULL SYNOPSIS
TRANSCRIPT