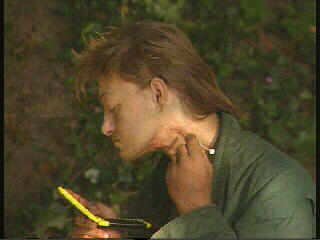 A feature on the novel Swiss plan to help drug addicts recover - by providing safe, controlled environments for the drugs to be taken.

Evelyn is a heroin addict. Since the age of 18 she's been caught in a downward spiral of unemployment, crime and prostitution. She's also one of a thousand users attending a clinic several times a day for a cheap, legal hit of heroin. Watching Evelyn 'shoot up' in the clean, controlled environment of the clinic is far removed from the squalid scenes of addiction in a Zurich park. She's even able to work as a waitress. But not all Swiss are impressed by the heroin trial. The referendum to halt it came from right-wing religious groups who label their government a drug pusher. Boris Piske once fed his drug habit as a male prostitute. Now married with two children, it was God and abstinence in a religious community which helped him quit. Meanwhile, on a drug bust in a downtown flat with the Zurich drug squad it's clear that illegal drugs are still in plentiful supply. Police say driving addicts underground will merely worsen the problem. So far the Swiss trial has shown that the heroin clinic does work. Ninety addicts have already withdrawn. The government is considering extending the trial. Produced by ABC Australia
FULL SYNOPSIS
TRANSCRIPT