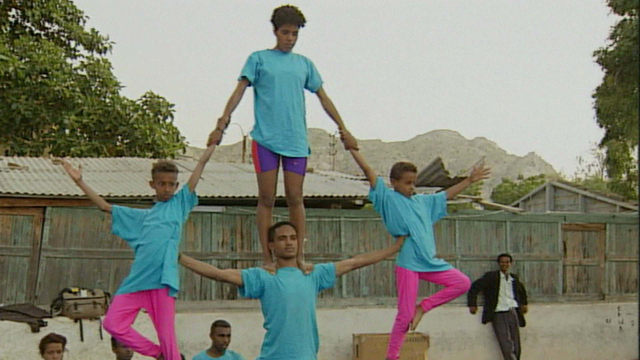 An uplifting feature about the circus that commemorates Eritrea's freedom fighters, in a country that has found peace after thirty years of conflict.

Happy singing emanates from an old bus as a political youth circus tours this peaceful East African nation. Eritrea gained independence from Ethiopia after a bloody thirty year war. Now this circus is keeping the memory of those who fought for freedom alive. Joshua Fseha Yohannes was one of the Children of the Revolution. He has immortalised the war in chronicles the children perform to rapt audiences. Out in the village of Deroque the women stay at home. Only virgins can marry. But veiled teenage girls are allowed out to watch the circus that's coming to town. They look on in confusion as girls their own age tumble unashamedly with boys. The circus brings Eritrea's second town of Kerren to a standstill. Here they re-enact a true scene from the war. The group mistakes an enemy Mig fighter for an aid plane delivering food. As they cheer they are bombed. Everyone is killed. Eritrea is a rare African example of ethnic harmony. Muslims, Copts and Catholics celebrate the country's rebirth at a festival together. Student volunteers dig ditches to rebuild the country's roads. An African tale with a happy ending. Produced by ABC Australia
FULL SYNOPSIS
TRANSCRIPT