A daughter's quest to understand her mother's transformation from Catholic society debutante to radical sex adventurer. 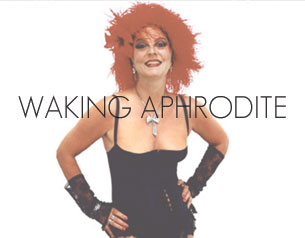 Sex adventurer, exhibitionist and former spiritual prostitute, Maggie, has spent the last ten years trying to help women unlock their sexual potential. But as her 60th birthday approaches, the realities around her are shifting. She preaches unconditional sexual acceptance but her heart is breaking because men no longer look at her the way they did. She transforms the relationships of other couples yet her own marriage is crumbling. This acclaimed new documentary, filmed by her daughter, follows Maggie's last sex workshop.

"Have a good time", says Claus, kissing his girlfriend, Lilith, goodbye. Although he tries hard to hide it, he doesn't want her participating in Maggie's sexual exploration workshop. And as she approaches the seminar, Lilith is having her own doubts. "A lot of feelings are coming up. Sadness and I'm nervous. There is a feeling that this is exactly what I need to do and still, there is fear, a lot of fear. And I can't explain it." "About ten years ago, my mother decided that the straight and narrow path into old age wasn't for her", explains Sarah. Determined to be more than a wife and mother, Maggie marched right into the heart of her own Catholic fears: female sexuality. "We have been programmed for millions of years to focus on men's pleasure", she complains. "I want to focus on women's pleasure." Maggie re-invented herself as "the priestess of pleasure", touring fairs with her 'orgasmobile', "offering orgasms for any lady that has the courage to step inside and receive it." She still did the sex party scene and, as a teacher, became a recognised name among European self-help circles. "I understood her need for soul-searching", states Sarah. "What I couldn't relate to was her need to shock people." And shock people, Maggie certainly does. Whether she's introducing women to the delights of Japanese bondage or assembling a team of male 'sacred prostitutes', her actions seems designed to challenge conventional stereotypes of female sexuality. Each of the women at her workshop had their own reasons for joining the group. Heidi is a mother of three who struggles to keep up with her husband's sexual demands. Lilith is a seminar addict, attending against the wishes of her boyfriend. And - at 68 - Ursula is the oldest of the group. As the workshop goes on, it's clear Maggie's heart isn't in it. "She said she felt burned out and ready to quit. The work had lost its magic for her." For many of her students though, the workshops are life changing. Lilith leaves her long-term partner. Heidi and her husband move into a commune. When her grandson, Tim, is born, it causes Maggie to reassess everything. "I was very much struggling with the letting go of middle age," she confides. "I know all about sex and now I'm learning about love." Due to the graphic sex scenes depicted, this film could only be broadcast after the watershed. At the same time, it is not a titillating sex doc and takes an intellectual approach to its controversial subject matter.
FULL SYNOPSIS
TRANSCRIPT

In deciding to make a documentary film about her mothers work as a sex teacher, Sarah Gonser, and her filmmaking partner Lance Kruger, originally intended to start a dialogue about what it means for women to live sexually free lives. As shooting progressed over the period of a year, it became clear that Gonsers motherpassionate, warm, and highly opinionatedwas reaching a critical "curve in the road" as she described it. On the one hand, she busied herself with teaching women about sex. Yet, at the same time, she was discovering her own overwhelming need to conform to powerful societal ideals of beauty, womanhood, and sexuality. Her world was cracking open. As it became clear that she was struggling just as much as the women in her workshops to make sense of her life and her role in the world, we realized our film was about much more than women and their right to control the when, where, and how of their own sexuality. Waking Aphrodite was originally a film about women seeking their inner sex kittens. During our year of shooting, and during the months of editing that followed, we realized it was about one woman's struggle to move beyond the world of sex and into a world of love and selflessness.