A grimly hopeful profile of a group of determined and desperate Iraqis as they rebuild their shattered lives. 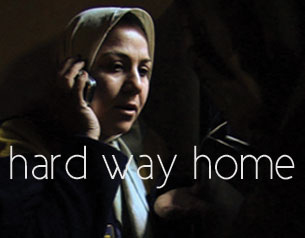 Day-to-day living is increasingly difficult for the 2 million Iraqi refugees in Syria and Jordan. Families who previously fled for their lives must now contemplate the journey back to Iraq. The reality of bombed and occupied homes, sectarian terror, and more fighting frightens them. But penniless and with no hope of work they must now consider returning. A personal narrative which more than anything tells of the enduring tragedy of war, long after peace returns to the streets.

Having now run out of money in Syria, Afrah must confront the militia now occupying their homes in Iraq if there is to be any hope of sustaining her family. Tentatively, she sits her sons down to break the news: 'Tomorrow, I might go away ... I don't know how things will turn out.' And so begins one of the most frightening journeys of her life. Joining her in Iraq we discover a powerful woman who has faced up to the gunmen, if not triumphed over them. For Ahlam, the return to Iraq is too painful to consider. Instead she dedicates her days to helping other Iraqis in need, and campaigns for better provisions for refugees: "Lots of promises, one per cent implementation. I don't mind for myself, but the families... What shall I tell them? What is the reason they get nothing?" Faiz and his family used to run a television repair shop in Baghdad. They too have spent all their savings, and move back with family in Iraq in the hope of starting anew once again. When they arrive to visit their friends and relatives, the reality is severe: "All we got out was the clothes we were wearing... We don't know who blew our house up, it was blown up, that's all. ...I'm an old woman. All I wanted was to check on my house. I went to look at my house and was shot.” Faced with inadequate healthcare, financial hardship and emotional turmoil, all three of these once-successful, highly skilled families wonder what will become of their lineage and the skills they had once hoped to pass down the family line: "Those my age who have degrees have now either emigrated or they are in exile waiting for Iraq to settle down, which could take 10 or 15 years. All the skills will have gone. Who will we rely on to rebuild the country?" "Most Iraqis have skills - army officers, journalists, doctors; these people are being hunted now. How can we go back to Iraq when we are threatened?" Despite their concerns, the Iraqi refugees maintain a glimmer of faith, and hold fast to memories of settled lives. Though currently the Iraqi people are forced to think carefully about whether a life in Baghdad is worth it. "I pray to God Almighty that [my children] will return to their country and rebuild it," Ahlam concludes, "because if this generation does not rebuild... Iraq will remain destroyed." A powerful and very human film, skilfully produced, and with no hint of the politics dominating so many other Iraq documentaries.
FULL SYNOPSIS
TRANSCRIPT