The Height of Happiness

A deep and humorous look at Bhutan as it struggles to adapt to the invasion of modernity. 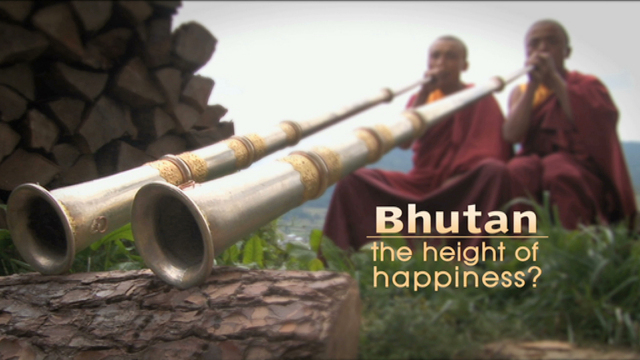 Long thought of as a secluded paradise, Bhutan is renowned for rejecting economic prosperity in pursuit of "Gross National Happiness". For centuries, its benevolent kings ignored technological advances, seeking to protect their people from outside influences. Then, overnight, 47 satellite stations descended on the country. Can Bhutan's mythical spiritual principles withstand this Western onslaught?

The tiny kingdom of Bhutan is hidden away in the Himalayas and dwarfed by its giant neighbours, India and China. While the rest of the world pounds the treadmill of economic development, Bhutan continues on its somewhat alternative path, pursuing the ultimate goal for its people: happiness. In a recent survey, 97% of the Bhutanese declared themselves to be happy. But why? The kingdom's guiding principals are based on the Buddhist belief in the sanctity of life and the preservation of nature. "If everyday you are surrounded by smoke, dust and pollution you cannot say that you are happy", explains Dr Tenzin, Minister of Labour and Human Resources. "If you forget your own traditions and philosophies, then you will not have a true happiness." For most of the 20th century, there were no cars, telephones or post offices to allow communication with the outside world. Then, in 1992, the first few tourist visas were granted. "The king knew very clearly that he should introduce high value and low impact tourism", states Rinzin Ongdra. Even today, the number of tourist visas granted is carefully limited. Bhutan's unique approach to modernity leaves a lasting impression on its Western visitors. "You feel the serenity wherever you go", states one woman. "There is definitely a gross national happiness feel about the place." But the big change came in 1999. Amidst much controversy, Bhutan became the last country in the world to allow television in. "A farmer got a television for the first time and all the villagers around came to have a look", recalls Ugyen Wangdi. "They spent the whole night awake watching television and couldn't get back to their work in the morning." The impact on the sheltered society has been profound. People who had previously been content with so little suddenly felt they needed the best product. "Before, you picked the toothpaste that was available and were pretty satisfied with it", states Chime Wangdi. Now "even rural women are very conscious of how they should do their hair and what they should apply on their face". Following a surge in teenage violence, the government decided to ban all channels considered to be a dangerous influence on their peaceful way of life. After watching wrestling on television, "children used to fight among themselves, just like what is happening on the wrestling", states Chimi Dorji. Others started dressing; "like the hip hop stars in the States". "I think we are going headlong into some of the very same mistakes of other countries and societies," fears Chime Wangdi. Already there are signs; "safety networks of caring for each other, of community, harmony, of communal feeling, all those are breaking down."
Etnia Film Festival, Finland, October 2008
Himalaya Film Festival, Amsterdam, 2009
FULL SYNOPSIS

Brian Becker was born in London, educated at the Royal College of Art, and has been involved in making television programmes for nearly thirty years, mainly in the areas of factual and educational programming, for Central Television and the BBC. This is his first independent documentary.

I first became interested in Bhutan after a chance meeting with a Bhutanese minister whilst filming in Sikim many years ago. Although widely travelled, like many, I had to confess to never having heard of the tiny kingdom. I developed a keen interest in Bhutan and have long been fascinated with its idealistic approach to conserving the environment and to raising the quality of life for the Bhutanese. Another chance meeting, this time with the Danish Consulate for Bhutan in Sri Lanka was just too much serendipity and when he offered to help me organise the filming permissions I just felt compelled to make the programme. I knew this would be a fascinating time to visit the country as it prepared for democratic elections and the coronation of the fifth king. My interest however was focused on the relationship between the happiness of the people and the invasion of new media, which is having a profound effect on centuries of tradition and idealism.
The recording was over two weeks with a crew consisting of director, cameraman, researcher [from UK] and a fixer, guide and driver [from Bhutan]. We were blessed with amazing weather and wonderful light wherever we went, I can only attribute this to our fixer Ugyen, who can make just about anything happen.
I, like most visitors, was very touched by the kingdom. Filming in Bhutan was a privilege, meeting and working with so many people who have a unique approach to life in the 21st century. It is a very special country and I only hope that it maintains the spirituality which is at the heart of the people.