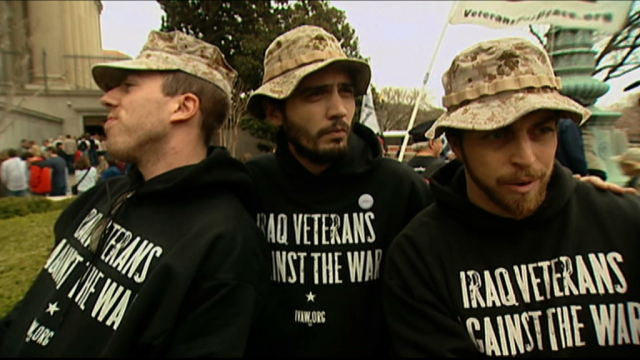 The US Marines have been fighting on the frontline since the invasion of Iraq. For them, unlike for the many armchair experts, the tragedies of this war are a reality which they must deal with daily.


Steve Thompson was seriously wounded by a roadside bomb; he went through a gruelling series of "Frankenstein" operations and is now back in Iraq. Scared of ground operations he is now serving as a helicopter pilot, "we're bringing tribes and religions together. Once they start accepting each other a little more, I think we can hand over." Thompson enjoys the adrenaline of combat and is committed to excellence, but some
are less driven. Lance Corporal Patrick Payne reminds us that "a lot of your standard rules don't always apply." He suggests that the punishment for the Abu Ghraib abusers was extreme...they were bored...they entertained themselves." It is this dirtier side of war which has led others to get
out. Pete Owen, a retired Lieutenant Colonel: "When you're looking into the eyes of a little girl whose feet got blown off, that is just an overwhelming experience...I just kind of lost my zest for that type of life." But even he agrees with Sergeant Joe Gonzalez's summing up, "I have friends who have passed away in that war and I kind of want to make a difference when we leave."