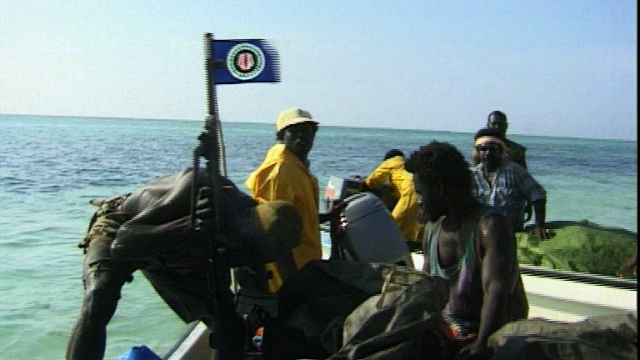 This report looks at those striving to make peace in the beleaguered South Pacific island of Bougainville.

New Zealand peacekeepers have arrived on the beleaguered South Pacific island to observe the current truce. Mark Worth gets to heart of the Bougainville Revolutionary Army (BRA) finding a rebel movement committed to ending the country's nine year civil war. If the current cease-fire holds until January then the UN will go in and the Papua New Guinea army will withdraw. BRA leader Francis Ona was the only important player not at recent peace talks. But almost his entire BRA command feel confident there is hope for the peace process. At Market Day in a local front-line village the BRA are spreading the message: "Be careful! Don't breech the cease-fire. If you breach it, you let your side down." Travelling up into Ona territory in the mountains, the mood is sharply different. Mark is ambushed by paranoid, hostile Ona supporters who call him a PNG spy. The support of local Chiefs has been vital to the BRA. But a village Chief rails against the long-running war: "Too many people have died. I'm really sick of it!" Despite the apparent split in the BRA thinking, the future for Bougainville looks brighter than ever. A report full of character and hope. Produced by Journeyman Pictures
FULL SYNOPSIS
TRANSCRIPT