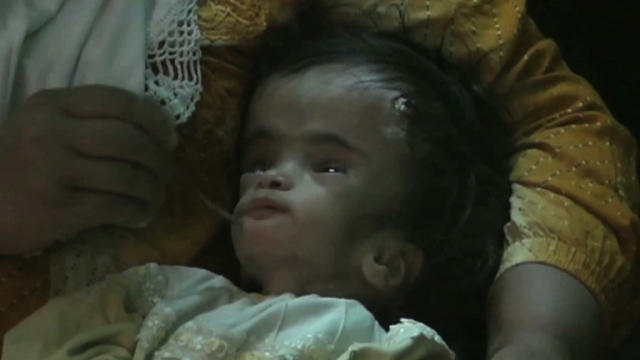 Cases of deformities in children appeared at an alarming rate around Fallujah. Could these birth defects have occurred as a result of White-Phosphorous weapons, or depleted uranium, used in munitions by US troops in 2004?

Tiba, aged 1, has a large and terrible eye defect. Dejected, her mother declares: 'I am having a nervous breakdown. She is suffering. I even wish that she died from the beginning so that we both would feel better.' The evidence for US troops contributing to the rise in children's deformities is conflicting: 'troops admitted using White-Phosphorous for lighting purposes... However they confirmed using it to kill ...in a statement to ABC news.' Families search for answers amongst contradictory information. And inadequate medical facilities and the lack of skilled professionals cause the children to suffer miserably for what the adults have done.
FULL SYNOPSIS
TRANSCRIPT