The story of the Ogoni people's campaign against a military government and international oil. 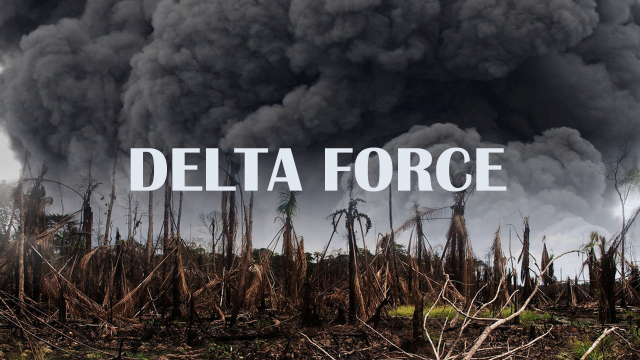 When the Ogoni people began to protest the pollution and exploitation caused by the oil industry operating in their lands, they were met with prompt brutality. Nigeria's military government attracted international condemnation for its oppression of these people of the Niger Delta. Villages were destroyed, their inhabitants indiscriminately killed, and Ogoni leader and writer Ken Saro-Wiwa held in prison for over a year on a dubious murder charge and then executed - all because of oil.

The award-winning 'Delta Force takes us back to when the people of the Niger Delta, who had been exploited for the oil on their land for over 30 years, finally had enough. They launched an international campaign against their government and the oil companies, with Ken Saro-Wiwa - a prominent environmental rights campaigner - at their head. The Nigerian militia responded in a way that would shock the world. Overnight, villages were razed to the ground and in the early hours of May 22, 1994, Nigerian police dragged Ken Saro-Wiwa from his bed and sentenced him to death. '"I was found guilty before I was even tried'," Ken said before his execution. Delta Force reveals fresh evidence of the Nigerian government''s campaign of terror, much of it using footage shot secretly by Ogoni people, in their protest against the pollution caused by Shell and other oil companies. With Ken Saro-Wiwa imprisoned and soon to be executed, the campaign takes on a new force. Thousands of Nigerians relentlessly investigate where the blame really lies. Contains short clip of Nigerian / Biafran Civil War
FULL SYNOPSIS