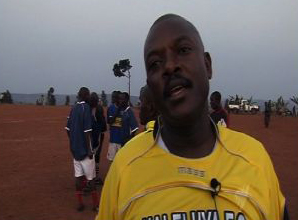 Burundi's President, Pierre Nkurunziza loves nothing more than taking to the soccer field. He uses these appearances, which inevitably draw large crowds, to push his message of peace and reconciliation.

"We shouldn't hold back on attacking but we shouldn't hurt him," a coach tells his team who are about to play the Haleluya Football Club. The Halelyua team's star player and focus of the coach's remark is none other than Nkurunziza. Burundi's "Football President" believes that the great game can unite the tribal divisions that ravaged his nation. "Soccer in Burundi is very popular and when you come here you see all the people, even the old men, old women, come to watch. It is very important to unite the people." Until four years ago Nkurunziza was a rebel soldier waging a guerilla war against the Tutsi soldiers. In 2005 he was elected President under a deal to end the conflict between the Tutsi-dominated army and Hutu rebels. Finally a ceasefire seems to be holding. "We can publicly announce that we have ended the war. And the energy we were using to fight and to flee, will now be used to mend the hearts of the people of Burundi and to develop our country," exclaims Nkurunziza. The government has promised universal health care and free primary education. Yet in a nation where money is sparse, everyone is called in to help and the President is setting the example.
FULL SYNOPSIS
TRANSCRIPT