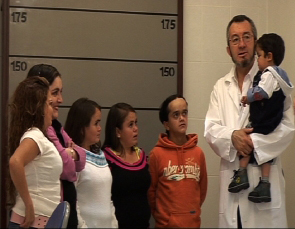 In the isolated mountains of Ecuador, a community of four-feet tall dwarves appear to be immune from cancer and diabetes. Here, two scientists are on a mission to find the ultimate cure for cancer.

Inbreeding among the small and remote Ecuadorian communities has led to a high percentage of Laron Dwarves. One third of the world's 300 Laron population live in the southern Loja province. "My parents are normal, my grandparents were normal. I have seven siblings, four of them are normal height and three of us are little," says one Laron sufferer. Dr Marco Guevaras and his brother Jaime believe the secret behind the dwarves' apparent immunity lies in the absence of a hormone called "insulin-like growth factor 1 or IGF1". Yet the scientists need to move fast in their research; an expensive treatment has already been discovered to alleviate the symptoms of the syndrome in children.
FULL SYNOPSIS
TRANSCRIPT