Is it wrong to sell your own kidney? Or to buy an illegal organ if it could save your life? A shocking and exclusive new film on an intractable subject. 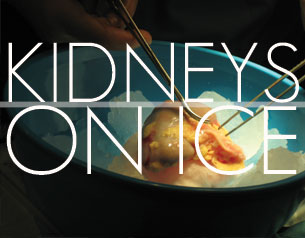 In a world where everything is for sale, is it wrong to sell your own kidney? Or to buy an illegal organ if it could save your life? Every year 15,000 human organs are trafficked from impoverished Europeans to recipients in more privileged countries. A shocking and exclusive new film on an intractable subject.

The traffic often occurs entirely in Western Europe. Anatoli is poor and looking for work in Germany. He's approached by organ traffickers who persuade him to have German Doctors remove his kidney. He tells the doctors that he will give it to a sick family member. 'They advised me what to say, how to talk, how to give ... everything'. After the operation he hands over the kidney to the traffickers for $10,000. Professor Muhlbacher has been tricked into performing such operations, 'investigations were carried out as usual and they were performing and acting and we just believed them'. One million people die each year of kidney failure. Only 60,000 receive kidney transplants. Many people who need new kidneys will do anything, to get one. They will pay anything. Anja has severe kidney failure and relies on dialysis to live. 'Being in dialysis, its like a vacuum in your head...you can't remember stuff and sometimes you are entirely sick.' But Anja is one of the lucky ones; she receives a kidney and her transplant goes well. 'It's kind of like being reborn...Being able to speak properly again...You feel more intelligent.' 'I thought that I'm not going to die,' explains Mihail, when he first considered selling his kidney to traffickers. 'They offered me $3,000 and I've never seen that much money, and because of the joy, I didn't think of anything else.' Mihail was 26 years old when he sold his kidney in search of a better life in Moldova. A few days after the operation in Turkey, the traffickers dumped Mihail on a bus back to Moldova with no painkillers or travel documents. He was forced to bribe the border police with $500 to get home. 'Afterwards I wanted to work but I couldn't...it hurt.' The lack of medical treatment and need to avoid hard work means people never fully recover from their operations. 'I didn't know when I went, how it will be, but now I'm sorry.' Six years on, Mihail is back to living hand to mouth. Former policeman, Marin, is serving ten years in prison after being convicted of organ trafficking. Marin became involved when his sick one-year-old son needed a liver transplant to survive. When Marin heard the news, he became desperate. 'Running around and looking for this money, I ran into these people that were dealing with organ trafficking'. Marin agreed with the traffickers to sell his kidney in exchange for the funds to finance his child's liver transplant. But the operation didn't turn out well. 'The baby died. I was left handicapped, without a kidney, and the baby died.' Austria has one of the highest organ donation rates in Europe. Professor Muhlbacher explains that in Austria, 'everyone is presumed to be in agreement with organ donation after death.' So in a world where the legal supply simply does not meet demand and illegal trafficking is increasing, should other countries follow Austria's example of increasing their donor rate by changing the law?
Director: Anja Dalhoff
FULL SYNOPSIS
TRANSCRIPT

Director Anja Dalhoff: Educated as a cinema photographer from The Danish Film School. Anja Dalhoff has made documentary films since 1987 mostly about social and anthropological subjects. During the last three years she has focused on the trafficking issues both from Eastern Europe and from Africa. In May 2008 she received the award: European Women's Prize for her investigative and profound work which has been shown all over Europe. Kidney on Ice is her third film about trafficking. In cooperation with producer Gitte Randløv she owns the film production company Danish Doc Production. www.danishdoc.dk
Co-director Alina Radu is an investigative journalist from Moldova and the editor of the Moldovan weekly Ziarul de Garda (www.garda.com.md). Through her research and reporting, she has been instrumental in bringing light to trafficking in human beings and organs, which is a major problem in the Republic of Moldova. She has been cooperating, on displaying organs and human trafficking, with most well known international organisations and media around the world.
Producer Gitte Randløv has had her professional life in documentaries for 20 years. Subjects are ranging from trafficking of women and organs, portraits of artists, cultural phenomenons, science docs discussing quantum theories, history etc. Also she has many year of experience within international co-production with broadcasters as Channel 4, France 2, RTBF, AVRO, YLE, NRK, SVT, DR TV, RUV and funding institutions as Euromage, Media Programme etc.

The making of Kidney on Ice During another film about human trafficking, I got in touch with the cruel realities in Moldova, where lots of people sell a kidney in order to survive the harsh poverty in the villages. Normally this issue is described only to happen in Asia but I realised that its also very common in Eastern Europe, and I decided to make a documentary from a European point of view. The number of willing organ donors is much lower than the demands, so there is a huge underground market for this kind of human misery. In countries like Spain and Austria the policy (policies and due to a transplant culture) organ donations are well working, and they don't need to engage in this criminal activity. I try to show the reality how well coordinated policies, in fact, can eliminate this grave exploitation of the poor. Anja Dalhoff, November 2008