A uniquely Iranian perspective on Afghanistan 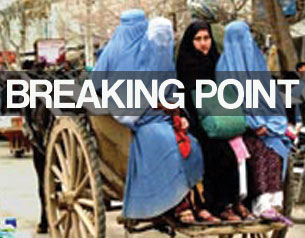 Our camera goes on a dangerous journey to understand Afghanistan. Why can't we bring peace to a nation longing for it? A uniquely Iranian perspective on Afghanistan.

At the moment there are some 40, 000 international troops stationed in Afghanistan under the NATO command. Yet when the film crew went to visit Kandahar they experienced intense social unrest. An unrest that has led even the state-run newspapers to criticise the incompetence of international forces in their country. 'The Americans haven't done anything whatsoever for the people' says one Kandahar resident who blames the American troops for 'breaking down the unity' of Afghan tribes. Friendliness is not something the foreign media usually associate with the people of Afghanistan. But Abdolhafiz Manssoor, a journalist living in Kabul, provides a different view of the Afghan people: 'there's a sort of moderateness to the Afghan people' he says, explaining that the country's 'meeting point of variant cultures and faiths have created a kind of tolerance'. Oddly enough, its citizens don't view the country's transformation into the world's no. 1 heroin hub and the threats of AL Quada and the Taliban as matters of grave concern. They are too preoccupied trying to make ends meet. 'There's no food to be found for us to eat' says one local man. Another complains 'we've received no financial aid in the last 10 years whatsoever.' The level of corruption amongst civil servants together with the extreme political and partisan divide between government officials and the members of the parliament, have all generated serious problems about moving Afghanistan forward. Amidst all this many in Afghanistan think that the NATO command needs to be reassessed. 'We are thankful towards the countries which have come to help' says one man 'but we ask them not to interfere with our Government.' Others are not so hospitable, stating that Professor Mohammed Sedigh, is not so polite: 'they haven't come here to rebuild our country, they have come to exploit our mines.'

Yet many see the foreign forces' presence as a positive, at least until Afghanistan has a 'powerful and central government' in place. Afghanistan is the only country in the world which has experienced 6 different models of government in the last 30 years. At the moment, the situation is still that of political instability, poverty and combat.