The long arm of Saddam Hussein in Kuwait 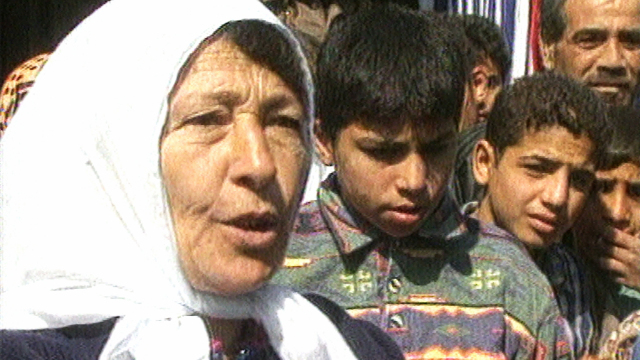 This ABC short investigates Saddam Hussein's continuing influence in Kuwait. Whilst the little country's inhabitants continue to live in luxury, reaping the benefits of an abundant oil supply, its pro-Western outlook is causing resentment amongst its neighbours, including Iraq.

A Kuwaiti mother tells us of her daily pain. Her son is still a POW in Iraq. If she could get to Iraq, she tells us, '"If I see Saddam I will kiss his feet to release my son." But the Kuwaiti government knows its security lies in kissing America''s feet, not Saddam's'. "We are a small nation, we cannot defend ourselves." As long as Saddam reigns they can''t feel completely secure in their desert island of wealth and privilege. But while the tension continues their wildly pro-US stance sours relations elsewhere. Throughout the Arab world the anger is more frequently over Israeli aggression and not Iraqi. In his Baqra shop, the local butcher reiterates the commonly aired sentiment. "You call Saddam a dictator and say he starves the Iraqi people, but what about the Palestinian people? Or don''t the Palestinian people have the right to live freely and peacefully?" In Jordan, a swathe of red and white clothed men chant. "With our souls and blood, we give our life for Saddam!" As Iraq is again under threat of military action the position of other Arab states is once again focus. Produced by ABC Australia
FULL SYNOPSIS
TRANSCRIPT