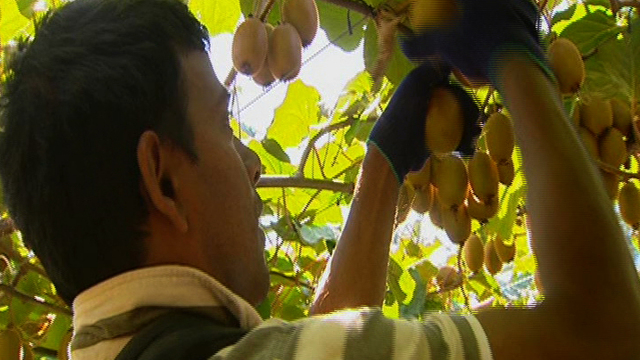 New Zealand has quietly opened its door to seasonal guest workers from five Pacific Island nations. In 2007 a trial program of 400 Pacific fruit pickers was judged to be so successful that this year, the Kiwis are welcoming 5,000 guest workers.

New Zealand's labour "Pacific Solution" is being hailed as a win win situation for all concerned. Not only are New Zealand farmers happy, but worker remittances go directly to where they're needed most - poor villages. It's a form of direct foreign aid, neatly bypassing the region's notoriously inept or corrupt Governments. New Zealand expatriate turned Vanuatu labour recruiter Dick Eade says, "they decided in New Zealand to reduce the number of backpacker permits and replace them with Pacific islands people because they are sitting here with nothing to do basically, willing to work. Instead of pumping millions of dollars of aid in - here's a very practical way and effective way - in that people will value the money if they've earnt it themselves." For decades, Australia and New Zealand have poured billions of aid dollars into the troubled Pacific region, often with questionable results. But this New Zealand scheme may really help rescue a lost generation.
FULL SYNOPSIS