Crisis in the Caucasus 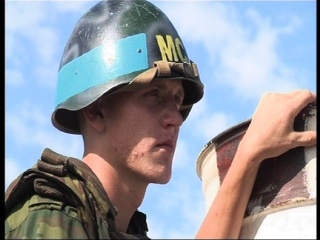 As Russian tanks rolled into South Ossetia, the world's eyes turned East. In the West the message was clear: Georgia falls victim to Russian aggression. But is our media telling us the whole story?

Today Abkhazia, previously a province of Georgia, is celebrating independence after Russian military forced Georgia out of the province. The sky flashes with fireworks and Abkhazians dance in the streets. But few outside share Abkhazia's enthusiasm. 'Russia is now directly telling all its neighbours that it will be using force - that it is trying to restore its lost empire', says Georgi Badrize, a Georgian diplomat. Few in the West would disagree. But in Abkhazia's Parliament, president Sergey Bagapsh is giving official thanks to Russia. This day, he tells us, marks the end of decades of Georgian abuse. 'People were starving', he says. 'We couldn't treat our kids, we were not allowed to import medications'. Many Azkhazians are angered by the pro-Georgian stance of Western media. 'Everybody thinks that the Georgians deserve independence and freedom and the right to be part of the international community', says humanitarian worker Liana Kvarchelia, 'and we are not'. Bagapsh claims that it is not only the media that is biased in Georgia's favour. He provides our reporter with an armed guard and permission to enter the border region between Abkhasia and Georgia, where he claims we will find evidence that the UN and NATO were complicit in Georgia's illegally stockpiling of weapons for an attck against Abkazia. A shocking and fascinating report.
FULL SYNOPSIS
TRANSCRIPT