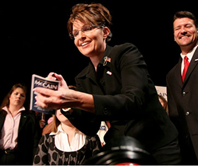 Who is Sarah Palin and what does she stand for? To find out, this report goes back to her hometown of Wasilla. We mix with locals in order to understand what makes her tick.

As we quickly see, her supporters are very keen to demonstrate their enthusiasm. From local bars to campaign meetings, housewives to moose-hunters, Sarah's people repeat that 'she's number one.' Scratching under the surface however, another less palatable side of the Governor comes to light. Apart from the ongoing 'troopergate' investigation, it seems she was in the vanguard of the religious right during her time as Mayor. One woman claims that she witnessed Palin 'trying to ask the librarian to remove books from the town's library.' The local radio DJ and personal friend of Palin's vehemently counters this: 'it's all a bunch of crap. This lady doesn't like Sarah. I bet you she's a supporter of Barrack Obama.' But this wasn't the only claim. When a liberal Baptist minister published a book on homosexuality, no one could find his book on the library shelves. 'Her line of thought is no different than a Muslim fundamentalist' he says. Dissention is also visible among Alaskan women, especially on the abortion issue: 'I don't believe she should have the right to choose for us'. Is Palin really the voice of the average American or a ticket back to the fifties?
FULL SYNOPSIS
TRANSCRIPT