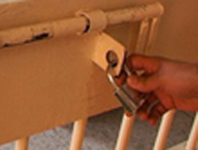 When Rita received death threats from her family, she was sent to the only safe place available - jail. Many of Jordan's women are held in protective custody for "crimes" such as being absent from home.

"In my opinion if someone's life is in danger it should be the person who threatens their life that should be locked up and not the other way around," says journalist Rana Husseini. In jail the women are allocated daily tasks such as embroidering and cooking, but many feel the strain of being cooped up behind bars. "You don't live just to eat and drink, do you? I felt dead, not alive." Sophia still needs a male guarantor to release her from her cell, but things are looking positive. Mizan, a human rights group is planning to re-house women such as Sophia. Eva Abu Halaweh, the head of Mizan, hopes to fully eradicate protective custody, but she will need to win over the hearts and minds of many who still believe that these "petty" crimes are not so petty. "As to why we detain her, she's the one who committed the crime," says Governor Saad Munasser.
FULL SYNOPSIS
TRANSCRIPT