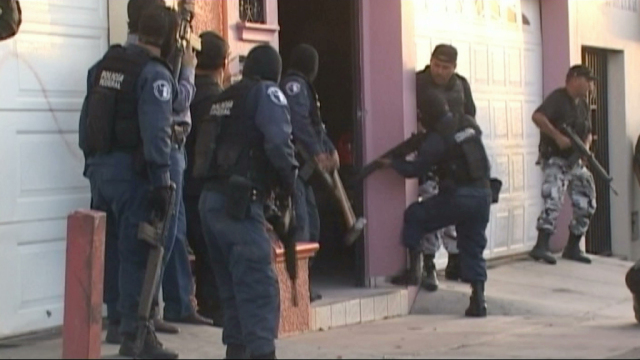 Mexicans are facing a horrifying increase in violence brought about by the government's decision to wage war on the powerful drug cartels. Each day sees more deaths and kidnaps, while corruption is endemic.

The death toll so far this year is 4000, higher than Iraq. Around 4 people a day are kidnapped for ransom. "We're assaulted every day," says one man, "Mexico as a country can not guarantee our security." In Sinaloa, life is a daily roll call of decapitations, torturing and shootings of gangsters and innocents alike. A hysterical young man just witnessed the shooting of his sister point blank in the head. The next day, assassins on motorbikes executed two men in broad daylight. There are witnesses, but they're too scared to talk. It's common belief that corrupt police are involved in the drugs trade and the kidnappings: "drug traffickers don't need to buy a minister to carry on his activities. They only have to buy the chief of police". While this report was in the making, a federal police officer - at one point a member of the Anti-Kidnap team - was arrested over the kidnapping and murder of a 14-year-old boy. It seems Mexico's president has a hard battle ahead of him. Last year American Congress gave him US$400 million to help fight the drug cartels but this amount is 'nothing compared to the money laundering from drug activity'.
FULL SYNOPSIS
TRANSCRIPT