Told in their own words, Ropemakers charts the history of the men and women who worked in the Yard. A lyrical and intimate portrait of a lost world. 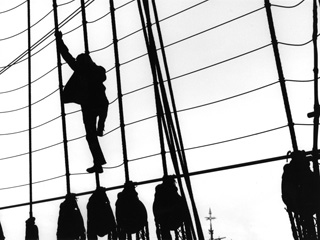 Generations passed through the iron gates of Chatham Dock Yard. Behind the walls giant cogs whirred, men and women lived segregated lives and bells chimed the hours. It was a community that scarcely changed in 300 years. Told in their own words, Ropemakers charts the history of the men and women who worked in the Yard. A lyrical and intimate portrait of a lost world.

A piece of rope a quarter of a mile long stretches away down the ropewalk, drawing us in to the famed but now defunct Chatham Dockyard. It is filled with the voices of former Dockyard employees: 'I went home that night and luckily my father was home on leave', recalls Maurice Adcock. 'He said, 'Take the Ropemaking, they'll always want rope. You've got a job there for life.' Traditional ropemaking survived at Chatham, alongside the latest nuclear and electronic technologies. The Dockyards represent a time before the service industry and big business pushed out many of the craft industries: 'We could see what we'd done and we took pride in doing it', recalls Joyce Hayes. For these workers, quality is of utmost importance, there is a sense of responsibility attached to working with the ropes, which would be used on the massive Naval war ships leaving Chatham Dockyard. 'We were always taught there's a man's life on the end of that rope'. The war effort made an almost backbreaking job bearable: 'It was heavy, dusty, dirty, oily, greasy but I didn't mind". For the first time the stories of the men and women of the Yard are told. Chatham was a military dockyard sealed from the outside world. Well into the 20th Century artisan innovation rested alongside severe rules and regulations. Talking about work was forbidden. Shut away in the spinning rooms, women weren't allowed to speak to men. 'Its surprising the number of romances and marriages. We often wondered how it happened' - says Maurice - 'But there was ways and means you know.' At its height the Dockyard employed over 10,000 skilled artisans in a vast array of trades from shipwrights to fitters and riggers. But in 1984 the Navy moved away and the Dockyard closed - marking the shift in industry, which left many skilled workers obsolete. The focus of the local community for over 4 centuries became a distant memory.
Director Prue Waller Swansea Film Festival UK, June 2007 - Best UK Documentary Twin Rivers Media Festival USA, October 2007 - Honorable Mention International Panorama of Independent Film Greece, 2007 - Award
'...a 'beautiful' film'
International Panorama of Independent Film, Greece '...award-winning documentary...looks at a unique way of life'
No6Cinema, Portsmouth '...excellent, conveying a great deal of history and at the same time exactly catching the atmosphere of the dockyard...'
Jonathan Coad '...interesting and special...'
Sheffield DocFest '...well-edited with a lot of great looking footage...very easy to watch'
NYIIF 'It really is terrific...the alternation of history with more visual sequences was very distinctive and, for me, wholly effective. 61 minutes is an ambitious length but it works'
Patrick Russell, Senior Curator of Non-Fiction British Film Institute
FULL SYNOPSIS
TRANSCRIPT

The film is based on first person accounts of dockyardmen and women. In addition to the documentary footage, ex-dockyardmen and women appear in a series of historical tableaux inspired and improvised by them. They present traditions alive in the collective memory and techniques used as part of their trade. The aesthetic qualities of film helped create an atmosphere of mystery and a sense of the past; pools of light provide focus while other areas of the vast buildings are allowed to fall away to darkness. ROPEMAKERS was shot in Chatham and Portsmouth Historic Dockyards and H.M. Naval Base Portsmouth. Rope continues to be made in Chatham.