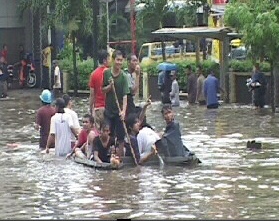 Jakarta is sinking. Without action, almost a third of the city will be lost to the sea within the next decades. Irresponsible development and lack of maintenance of the city's waterways are to blame.

Low-lying Jakarta relies on its canals against flooding but their maintenance has been poor. 'About 50-80% of the capacity is gone because of the sediment and the solid waste. That translates from a flood every 50 years, to one every 2 or 5 years.' Slums are most affected but they're not alone. 'Everyone's immobilised when the floods occur'. While the poor rummage in brown sludge in search of rubbish to sell, the rich escape to luxurious malls. But these add to the problem: 'When a city develops it gets heavier. The combination of water being extracted and creating vacuums in the aquifer means the city is pushed downwards'. The choice is clear: either stop groundwater extraction or build a massive sea wall off Jakarta's coast, and if not one of the world's great cities will be lost.
FULL SYNOPSIS
TRANSCRIPT