This is the modern-day story of a native peoples' remarkable victory over Western Colonial power. 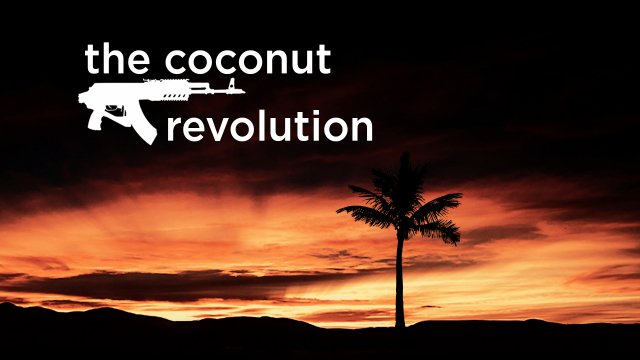 This is the modern-day story of a native peoples' remarkable victory over Western Colonial power. A Pacific island rose up in arms against giant mining corporation Rio Tinto Zinc (RTZ) - and won despite a military occupation and blockade. When RTZ decided to step up production at the Panguna Mine on the island of Bougainville, they got more than they bargained for. The island's people had enough of seeing their environment ruined and being treated as pawns by RTZ.

RTZ refused to compensate them, so the people decided it was time to put an end to outside interference in the island's affairs. To do this they forcibly closed down the mine. The Papua New Guinea Army (PNGDF) were mobilised in an attempt to put down the rebellion. The newly formed Bougainville Revolutionary Army (BRA) began the fight with bows & arrows, and sticks & stones. Against a heavily armed adversary they still managed to retain control of most of their island. Realising they were beaten on the ground, the PNGDF imposed a gunboat blockade around Bougainville, in an attempt to strangle the BRA into submission. But the blockade seemed to of had little or no effect. With no shipments getting in or out of the island, how did new electricity networks spring up in BRA held territory? How were BRA troops able to drive around the island without any source of petrol or diesel? What was happening within the blockade was an environmental and spiritual revolution. The ruins of the old Panguna mine where being recycled to supply the raw materials for the world's first eco-revolution. A David and Goliath story of the 21st century, The Coconut Revolution will appeal to people of all backgrounds Winner:
FICA Festival of Environmental Film, Brazil
BEMA Richard Keefe Memorial Award - WWF
Golden Kite, Best Documentary, Mar del Plata, Argentina
Silver Kite, Best Film for Young People, Argentina Runner up:
BEMA (British Environmental Media Awards) Best Documentary
Amnesty International Awards, Best Documentary
One World Media Awards 2001, TV Documentary
FULL SYNOPSIS
TRANSCRIPT