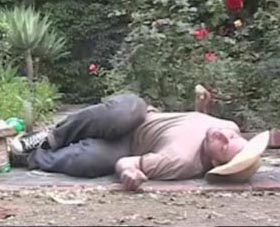 A US Health Department survey estimates over 2 million people have tried Salvia, a powerful new hallucinogen. But plans to outlaw the drug could end the ground-breaking research into its medical uses.

Salvia use has skyrocketed in the past year, spurred on by the flood of YouTube videos, showing the herb's short-lived but intense effect. Little is known about whether salvia causes any long-term brain damage or even whether it's addictive but some say campaigns to impose a nationwide ban are exaggerating the threat of a drug described as 'intense' but not enjoyable. Professor Roth is credited with discovering that the herb's unique active compound only stimulates one receptor in the brain instead of many. Roth explains, 'if we can understand why that is then that might give us clues to how we can make more targeted medications for other diseases.' With this early evidence suggesting use in the treatment of pain and even drug addiction, Salvia may offer more than it threatens.
FULL SYNOPSIS
TRANSCRIPT