Srebrenica: The Trauma of the Blue Berets 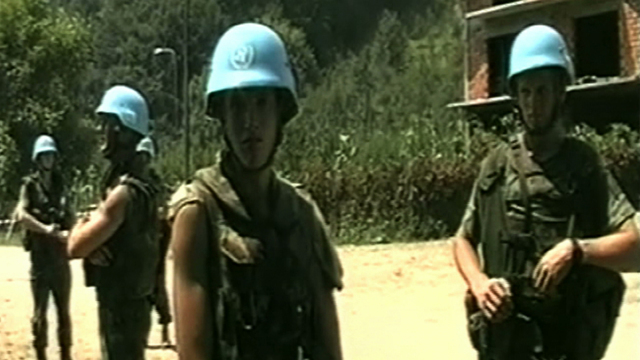 When Serb forces occupied Srebrenica in July 1995, Dutch UN forces were given strict orders not to intervene. Today the peacekeepers reflect on their shame at not being able to protect those killed.

Under General Ratko Mladic, thousands of Serb families were separated and men dragged to their deaths. The Dutch peacekeepers helped the Serb forces to separate men and women, not understanding they were helping this mass murder. The soldiers who were there can never forget what happened and their memories bring shame instead of pride. Former UN soldier, Adje Anakotta, explains; 'We want the people of Srebrenica to know that we feel the tragedy just as much as they do. We have all been abandoned - both the people of Srebrenica and us soldiers.' Henry Van De Belt is one of the few former UN soldiers to return to Srebrenica after 1995. He still remembers trying to block out the guilt and the effect it had on his fellow soldiers. 'I needed to drink so that I wouldn't have to face it. Some have not even managed to return. They were killed or committed suicide. Those guys saw no way out.'
FULL SYNOPSIS
TRANSCRIPT