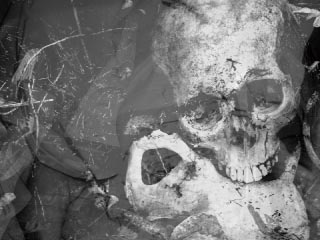 Junk Films is a collection of short films from Japanese photographer and documentary filmmaker Tsurisaki Kiyotaka.

Kiyotaka is primarily a photographer, specialised in recording death. As a filmmaker, he takes more or less the same approach as he does as a photographer, traveling the world as a war photographer. Only, he's not interested in the fighting, but in the results after the battle, in the bodies of those who didn't survive. "As a photographer in a crowded industry, finding your own niche might be a difficult task. For artist Tsurisaki Kiyotaka, a request to shoot a dead body for an S&M magazine has turned into a prolific career that has seen him photographing more than 1,000 corpses in some of the world's most volatile areas. Tsurisaki has published six books, two of which, Revelations (a 12-year anthology of his corpse shots) and Requiem De La Rue Morgue have been released in France. But while there is a voyeuristic element of shock and gore value, the photos are strangely compelling - portrait-like, still life, or journalistic reportage, each corpse bearing testimony to a tragedy." - Bizarre Magazine.
FULL SYNOPSIS