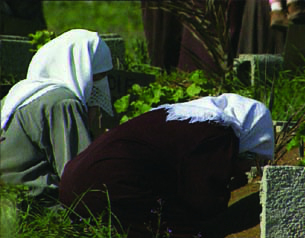 New evidence that the Algerian government may be manipulating the country's horrific cycle of violence. Algeria's bloody civil war has claimed 75,000 lives since the government cancelled the elections won by the Islamic fundamentalist party, the FIS, in 1992.

Now a former Algerian diplomat Mohammed Larbi Zitout has defected, accusing the government of wanting to perpetuate the war, in order to maintain power and control of the country's vast oil and gas reserves. Women weep at a graveside, mourning a recent night-time massacre of men, women and children. The government calls it a war between good and evil, blaming Islamic extremists for the massacres. The stories of lonely widows echo each other in every detail - nobody understands why the Islamists are killing civilians. Human Rights Advocate Selima Ghezal says Europe could do a lot. more. Moutefa Bouchachia, another Human Rights Lawyer says he believes the GIA, the radical armed Islamic group, has been infiltrated to ensure conflict continues. Produced by ABC Australia
FULL SYNOPSIS
TRANSCRIPT