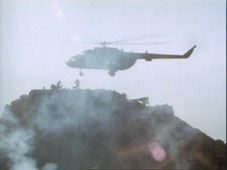 It's the 20th anniversary of the Soviet withdrawal from Afghanistan. We offer two definitive documentaries on the Russian war in Afghanistan. The relevance to the present conflict in Afghanistan is clear.

Afgan: The Societ Experience - 40'00''
During the 1980s Russia fought a disastrous war in Afghanistan. Here we offer the definitive documentary on the war, and ask if there are any lessons to be learnt from the Soviet experience. "This film is an experience in Glasnost". With these words General Serebrov, the highest ranking Soviet political officer in Afghanistan, granted Director Jeff B Harmon and Cameraman Alexander Lindsay the unprecedented access necessary to make Afgan. Made back in 1989, the film considers the Russian-Afghan war from the point of view of the invaders, showing the conflict through the eyes of ordinary Soviet soldiers and officers on the front line. Afgan is a historical but nonetheless pertinent piece, offering unprecedented footage of Afghanistan's uncompromising terrain and a disastrous attempt at conquering it. (Ref 1081)
Jihad: Afghanistan's Holy war - 52'00''
On Christmas Eve 1979 the Soviet armed forces invaded Afghanistan. Over the next ten years one million Afghans were killed and approximately four million fled the country. The war in Afghanistan was largely ignored in the West - the trickle of information that left the country came from Western journalists and filmmakers who entered Afghanistan illegally, ignoring Soviet threats of arrest and execution. Only after a considerable time with the Mujahideen at the front, were the filmmakers able to capture on camera the warriors' most personal feelings and beliefs. JIHAD centres on individuals, some of whom were captured or killed during the making of this film. The total candour of the Mujahideen is what distinguishes JIHAD from any previous documentary on the Soviet-Afghan war. (Ref 1082)
FULL SYNOPSIS
TRANSCRIPT