They thought they had made the necessary preparations but nothing could prepare the people of Victoria for the fireball that swept through their state. 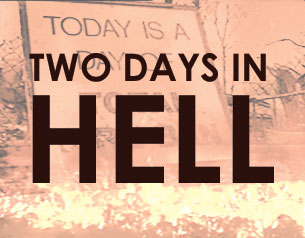 They had been warned. They thought they'd made necessary preparations but nothing could prepare the people of Victoria for the fireball that swept through the state killing more than 200 people. How did it happen? And what about the preparations so carefully made? A cutting edge documentary that stares into the face of the inferno.

'A wall of flames', 'a massive roar,' ' the fear on their faces', ' the screams'. Images the survivors will never forget. It's barely a week since the deadliest bushfires of modern times tore through Victoria, leaving entire towns razed to the ground. And people are still struggling to pick up the charred fragments of their lives. Joe Milburn shows us around his shell of a home: 'All these trees tossed here, that's my front veranda', Joe tails off. It's hard to imagine that he once called this home. Victoria had been sweltering under heat waves in the weeks before the bushfires. The fire hazard scale runs from 0 to 100 but was showing 'indexes in excess of 200'. Russell Rees, Chief Fire Officer, warned civilians that they were in 'unchartered territory' and issued a total fire ban. Victoria held its breath. At 11am on Saturday the 7th February, reports surfaced of a fire at Kilmore. As burning embers rained down the fire became a firestorm and hundreds of people such as John de Maria were caught unawares. 'It was like a tornado' he says. 'I put the family in the car and thought it's too late to run'. But the fire was moving at breakneck speed, and it wasn't until an hour later that the official alert went out. Joe Milbourne was sitting down with a good book when he first saw the 'glow' behind his curtains and opened them up to 'apocalypse'. 'My street had 47 houses in it'. There's 4 left.' The relatively small number of patients arriving into hospitals was deceptive. 'The intensity of the fire, the rapidity with which it crept', explains the Director of the Alfred Hospital, 'meant that many people were just unable to get away.' Now survivors are left with the horrifying task of identifying the bodies. Many are so burnt they're 'unrecognisable'. A Royal Commission has been set up to explore how so many people could die in such a short time. Although he admits that people weren't adequately informed about the fires, fire ecology specialist Dr Kevin Tolhurst says the alternative of evacuation is 'unthinkable.' But with Prime Minister Kevin Rudd urging the nation to 'brace itself for more bad news', Australia will have to think deeply, if it's to avoid further loss of life into the future. Reporter: Quentin McDermott
FULL SYNOPSIS
TRANSCRIPT