Bhambatha - War Of The Heads

A powerful mix of dramatic reconstruction and historic archive, this doc is as topical as it is historical 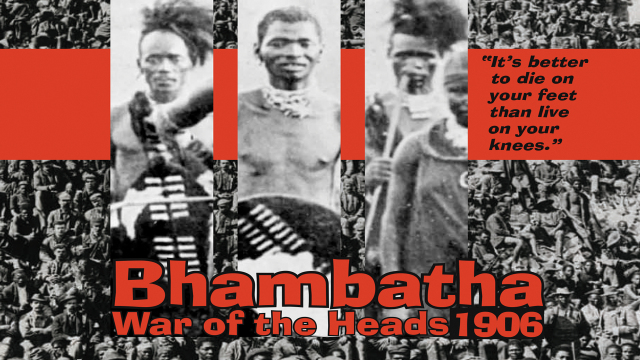 In 1905, South Africa's British overlords set out to force the powerful Zulu nation to work on white farms. For Chief Bhambatha, the introduction of a poll tax to compel Zulus to do this, was the last straw. They had already been deprived of land, faced war and famine and now their patriarchy was at stake. The battle which followed brought to the surface the remarkable strength of the Zulu nation, a nation again on the ascendancy in South Africa. A powerfully told exploration of a very relevant history, with overtones of the strength that defined the great Shaka Zulu.

"It's better to die on your feet than live on your knees!" Bhambatha's war cry summons his army of courageous young men. Increasingly pushed off their farms by white farmers, they must tear down forests, work the land and buy the results for a fortune. "The produce of our sweat is sold back to us in white stores!" one Zulu cries. Drums pound, fire lights up the sky and the thunder of Bhambatha's 8000 warriors can be heard for miles around... But Bhambatha's union of diverse tribes didn't come easily. The majority of African chiefs had deferred to colonial rule. "Some say the real chief is the Governor of Natal. This is nonsense!" one of Bhambatha's men says. But the British Natal colony's assumption of power meant that they could ignore hereditary rule and select chiefs themselves. Faction fighting, sheep stealing, unpaid rents - these were the charges brought against Bhambatha as reasons for his removal as chief. But Bhambatha would not be deterred. "For us to have clear direction we need great leaders", the preacher man cries "no matter what crimes you commit God will love you". The ideas of the Independent African churches that arose in 1906 inspired Bhambatha- they saw it as their responsibility to preach the word of 'dissent'. "These people cannot be trusted. We will have to use force against them", Governor McCallum resolves. When two white policeman are killed in a protest against poll tax, martial law is declared. "Now we can burn the blighters out", says Colonel McKenzie. Hundreds of troops are sent to cow Africans into submission. Those chiefs who oppose the law are summoned and even executed. "To hand over myself to the magistrate is not an option", Bhambatha says. But many of the older men in his tribe desert him, giving in to the poll tax for an easy life. Dinuzulu, the Zulu prince, refuses to support Bhambatha. The only option is to launch the 'War of the Heads', alone. "Seven columns are to converge simultaneously at the rebels' camp", McCallum announces. Bhambatha's men fight bravely- a battalion of dock workers, rickshaw drivers and half the African police. But the weapons and strategy of the British are overpowering. "The young are being decimated!" somebody cries. A body identified as Bhambatha's, stabbed so hard the blade has broken in two, is paraded as a sign to Africans and Europeans alike, that the rebels have been conquered, the 'War of the Heads', won. But the spirit to resist injustice continued to rage within Bhambatha's followers. Even now, his great grandson maintains "he escaped from everyone, he fooled the British". A powerful rediscovery of Zulu strength as the tribe today moves back to centre stage in South Africa. LEARN MORE.
WATCH MORE.
JOIN THE DISCUSSION. Directed by Rehad Desai
FULL SYNOPSIS 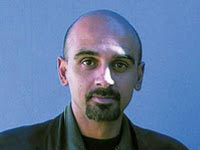 Rehad Desai is the Producer and CEO of Uhuru Productions. He began his career in print media in 1986 while living in India. There he freelanced for the Times of India for six months. He then went to complete a history degree that began in London and was completed at the University of Zimbabwe. In 1996, Rehad entered the TV and film industry as Producer, where he has focused much of his energy on historical and socio-political productions. 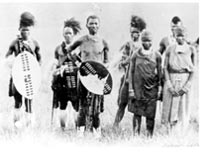 Despite the colossal challenges posed by making a historical documentary on a small budget (R1.6-million), Desai was determined to reconstruct this pivotal event in South Africas past as accurately as possible. He devoured whatever material had been written about the 1906 rebellion in Greytown that was sparked by a poll tax imposed by colonial authorities on black men. The latest two books from Jeff Guy  published at the end of 2006 and early 2007, helped incredibly, says Desai, his understanding of the story really helped us build the narrative. They also scoured archives for testimonies from the time, as well as newspapers and a commission that was established to investigate the causes of the rebellion.