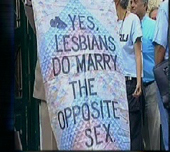 Sappho the Ancient Greek poet, muse and claimed by some as the world's first feminist, became a gay icon for women. Soon her birthplace, Lesbos, was adopted as a name for gay women all over the world.

Native islanders have taken women to court over who has the right to the Lesbian name. Local Lesbian Maria jokes, "I am two in one, and I'm proud to say it". On the other side of the argument most residents are offended. "It's an issue of the culture and history of Lebos". The island, which has recently seen a surge in tourism due to publicity stirred up in court, has become a spiritual pilgrimage destination for Lesbians all over the world.
FULL SYNOPSIS
TRANSCRIPT