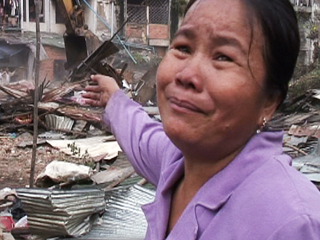 In the name of so-called development, rampant land developers are destroying poor Cambodian communities, leaving thousands homeless. All with a wink and a nod from the country's political elite.

'They don't care - they want to make profits' says Sam Rainsy as he wades through a flooded settlement in Phnom Penh. With a developer filling in the nearby lake to build a high-rise, it's just a matter of time before the residents are pushed out. A 2001 law grants ownership to settlers of more than 5 years. Yet across Cambodia developers are bulldozing homes after offering an unfair pay-off to residents. 'We had to fight for our belongings!' says one woman who was dragged kicking and screaming from her home. 'What the company has done with the complicity of authorities is illegal' cries a human rights worker. The neighbouring community watches in silence, knowing that they will be next.
FULL SYNOPSIS
TRANSCRIPT