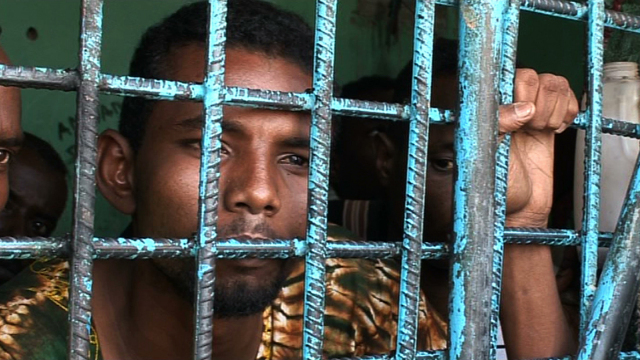 Foreign fishing fleets stole their lobsters, which drove them to desperation. This is the reason given by poor Somali fishermen who turned into gun-toting pirates mugging giant ships for millions of dollars.

Driving to Puntland requires an armed escort to avoid kidnap. It's a lawless pocket of trouble on the Somali coast. The country's notorious instability provided an opportunity used shamelessly by the world's fishing fleets. For years, Ali witnessed foreign trawlers stealing the lobsters. 'They brought ships that stole even stones from the seabed.' 'Before we were catching about ten tonnes per day but now we are catching three or four hundred kilos per day' says one factory owner. 'Our jobs, our profession as fishermen was stolen from us by these foreign ships.' And so Ali and hundreds of others turned to piracy. Over the last twelve months there have been hundreds of attacks. Among them, the high-jacking of French yacht Le Ponant. In a much-publicised operation, the French navy freed the hostages and captured the pirates. But a long-term solution to piracy must come from the inside. 'An effective anti-piracy force has to be based inside Somalia and come from Somalia,' insists Africa specialist R.Middleton. Only the return of law and order could make that possible.
FULL SYNOPSIS
TRANSCRIPT