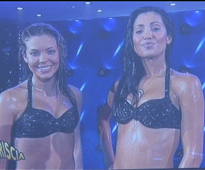 Sex and politics have always gone together. But now Italian Prime Minister Berlusconi is canvassing votes with a staff of glamour models. Man of the people or national embarrassment? You decide.

'There is no scandal' says Berlusconi's defence minister 'some of the girls are beautiful, others less so. If they are beautiful we don't mind!'. Lara Comi, a statuesque brunette, is being paraded in front of the Italian public. Only two weeks ago she was no more than a junior party employee. Now she's on the brink of international responsibility. 'It's a really unique opportunity for a 26 year old girl' Lara says. Almost all of Berlusconi's female candidates for the European elections are under thirty, attractive and with little political experience. Yet here in Italy, Berlusconi is more popular than ever. A recent opinion poll gave him a 66% lead on his competitors. 'He's a great man, our Silvio' says one voter 'so long as the girls are over 18!' To foreigners he may come across as crass and out of touch. But to Italians here at Berlusconi's passion project, AC Milan, he's a football fan, a business man who gets the girls. 'The emperor' as Berlusconi's soon-to-be ex wife calls him 'must be entertained'. Could Berlusconi's appetite for glamour change the face of the European parliament?
FULL SYNOPSIS
TRANSCRIPT