No-holds-barred interviews with bullies and their victims reveal the true cost of our childrens' cyberspace obsession. 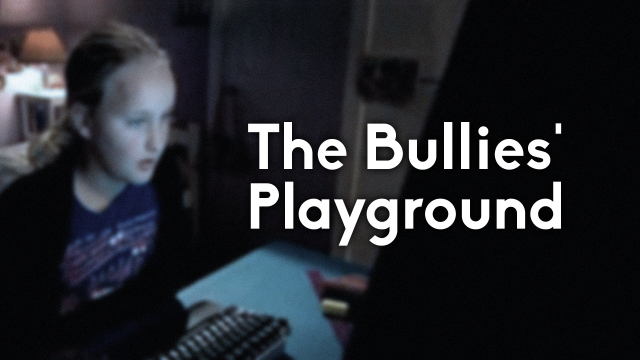 Despite major efforts from governments and schools, bullying remains an intractable problem made worse by modern technology. Once it was fists, rocks and schoolyard chants - now bullies have the net, mobile phones and Facebook as playgrounds for brutality. No-holds-barred interviews with bullies and their victims reveal the true costs of our childrens' cyberspace obsession.

On an ordinary morning two pupils make their way to school. As 12 year old Elijah arrives at the gates, pupils spray him with aerosols and pretend to disinfect themselves. Tori's 'own personal hell' begins at lunchtime. Boys film her being pelted with food and bottles on their mobile phones. When Elijah and Tori finally arrive home, their tormentors are still there. Elijah is sent threats on instant messenger and Tori discovers the video of herself at lunchtime broadcast to the world on YouTube. 'I want to jump off the balcony' Elijah admits to his parents, 'there's no escape'. Elijah's parents felt incapable of protecting their son at school. 'One teacher said 'all kids tease - its just part of being a kid'', says his mother. She describes getting the school to acknowledge the bullying as 'a four year struggle'. But it's not just at school that parents are helpless to defend their kids. Now even in their homes, children are subjected to the constant 'twitters' and Facebook 'pokes' of their tormentors. 'We assumed our child was home with us and safe, he's in his bedroom and he can't get hurt', says Ali in tears - his son, Allem, received death threats from his best friends when he began seeing a girl who had a boyfriend. 'Many children don't report online bullying because they're afraid their parents will cut off access to the internet' says Professor Cross. But schools are becoming more aware of the perils of growing up in a YouTube generation.

'The internet is the new toilet door' cyber-safety officer Susan tells a giggling auditorium of girls. Her tale of a girl who went to a party and woke up in a strange boy's bed, naked and covered in writing that said 'soon to be on Youtube' silences them all. 'Sit with your children online, even join some of the sites, so you can see what there is to enjoy, as well as fear' Professor Cross advises parents. The ability to give everyone a public voice, just may be the cure as well as the disease when it comes to e-bullying. 'My name is Elijah and nearly every day at school I'm laughed at' types Elijah. His openness about being bullied led many pupils to send letters of support. Tori has gained a new strength from the short stories about bullying she posts online to help students and parents alike. For Ali, it was too late. Allem committed suicide in February this year. His memory serves to remind us of how a 'fantastic tool of knowledge can become a tool of death' says Ali. A poignant, unmissable doc. Reporter: Quentin McDermott
FULL SYNOPSIS
TRANSCRIPT