A fascinating symbol of the world ecomony 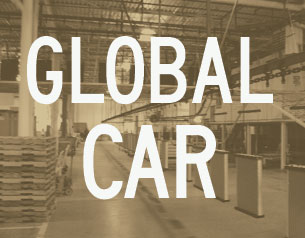 The automobile was once a shining example of American ingenuity and industrial might. It shaped the country's cities, defined lifestyles and was tightly woven into the fabric of the American psyche. But with world dynamics shifting and an economy in crisis, the American and global car industry is facing an uncertain future. Filmed over the course of four years - in half a dozen locations - Global Car is the fascinating story of where the components of the American car really come from.

By looking at one vehicle - the Dodge Ram pickup - and tracing the origins of its components, a symbol of the world economy appears, and it is in your garage: incorporating as much as nine hundred parts from forty different countries! 'We fit about forty percent of the world's cars- The manufacturing base is reducing and has been for a number of years' Brian is the CEO of Berck Ltd, UK. His company is part of a global supply chain that provides parts for radiator caps: But global competition means global repositioning, and a supplier never knows when its customers are going to find an alternative source. Prem is the Senior General Manager at Sundram Fasteners. His company import parts from Berck Ltd. Formerly a division of an English company, they are now a global supplier of radiator caps, and are based in India. They gain an advantage over Western suppliers through cheap labour and production costs 'All those suppliers who are based in the UK, who were trying to supply General Motors, stand today as our suppliers.' All GM vehicles in North America now sport a Sundram radiator cap. 'I would say that the potential for competition from overseas is probably the biggest threat we see', says Brad, the plant manager of Modine Radiators in Clinton, Tennessee. His company is struggling against the increasing competitive pressure of globalisation. But Prem at Sundram argues: 'Globalisation in the real sense is the Europeans and Americans. They look forward for lower cost countries.' So when will manufacturing in India and China completely overtake Western manufacturing? Some analysts predict that as production levels rise in lower cost countries, so will the workers wages, therefore equalling the difference in cost. But some are sceptical: 'We say that the west will maintain its competitive edge by seeking to evolve new technologies - but we must not lose sight of the fact that these emerging nations are very technically capable themselves, and eventually they will catch up.' So will there come a time when there is no longer any use for Western suppliers? Already it can be said that there isn't a car built that is 'all American'. 'Sentimental attachment is gone. It's more of what they're getting out of it for what they pay' claims Prem.

Dodge Billingsley founded Combat Films and Research in 1997 and has since spent much of his time continuing to document numerous global hotspots including Abkhazia, South Ossetia, Chechnya, Afghanistan, Pakistan, Western China, and Iraq, splitting his time between producing documentaries, writing, and lecturing. He is currently in preproduction on his latest film, Korea: Last Divided State, available for broadcast in early 2010.