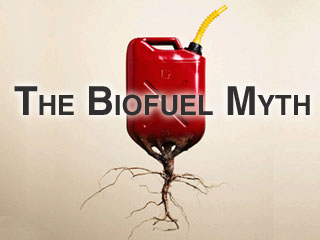 Biofuel was the buzzword of the millennium's Green Revolution- an eco-friendly blend of plant oil with regular oil, which could run your car and produce electricity. Now the global demand for Biofuel is threatening the lives of the 45 million people who depend on the rainforest for food. A riveting look at the food vs. fuel debate.

"Renewable energy is the energy form of the 21st century", cried Claude Turmes of the European Greens. His passionate speech won Europe over to the Green Revolution. Today, the Orang Rimba tribe in Indonesia watch terrified as the picturesque rainforest they live by is demolished to make way for palm oil plantations. "By cutting down the rainforest they are taking away our home, it will be the end of us", the chief of the tribe, Din, cries over the deafening sound of chainsaws. He is surrounded by palm oil plantations as far as the eye can see. "I'm thinking of the future, and maybe it's a way to save oil in order to help the planet", says a customer at the Paris Motor Show. Most European politicians still share this enthusiasm, granting 6 billion euros in subsidies to convert public transport to biofuel in the past few years. The Orang Rimba tribe explain what this really entails. "First they cut down the trees, then they sell the wood, then they let the soil dry out and plant their oilpalm plantations everywhere", says Somat, a farmer. Since palm oil has been used in Europe as a biofuel, he's seen his beloved rainforest shrink faster and faster. Though the Indonesian government and the companies profit richly from this produce, farmers like Somat find it impossible to survive. "These oilpalms are standing on my land, but I don't get any of the proceeds from their fruits", he cries. His protests echo throughout Indonesia - a full-scale march to the town hall against the plantations, erupts. "Stop the theft! Give us back our land!" they cry. Allowed into the town hall, the farmers come up against a wall. "The government supports the worldwide biofuel programme", says a council representative. But politicians are beginning to explore the dilemma. They begin to call biofuels 'agrofuels'. Claude Turmes, who once spoke so passionately about the biofuel revolution, no longer advocates them. "We have tabled a vote against the EU's agrofuel quota. We Greens were in favour of zero percent, but we were only able to move the others from 10 to 4 percent", he says. These reforms don't change the hunger problem in Indonesia. New plant oils that don't interfere with food production are being developed. But so long as there is a high demand and big business to be made, vast areas of land are being designated for biofuel plantations. The Orang Rimba tribe, who call themselves the children of the forest, beg for food on the Sumatra highway as car after car passes them by. LEARN MORE.
WATCH MORE.
JOIN THE DISCUSSION. 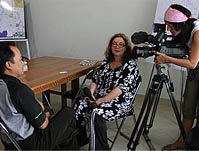 Inge Altemeier was born in 1956 and grew up in Hamburg. She completed her studies at the University of Hamburg in Engish, Political science and Pedagogics. She has undertaken freelance work for radio and television and studied at the Academy for Journalism. Since 1991, she has worked as a freelance journalist, director and author for NDR, SWR and Der Spiegel. She specialises in investigative journalism and has won several media awards. 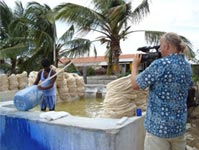 Reinhard Hornung was born in 1957 and grew up in Hamburg also. He completed his studies at the University of Hamburg in Economics and Politics with an emphasis on Sociology and New Media. After training in several film production companies, he works as cameraman, cutter, producer and filmmaker for public television in Germany. In addition, he is committed as media instructor in the Media workshop Die Motte in Hamburg.