The definitive documentary on the Genetically Modified Food industry 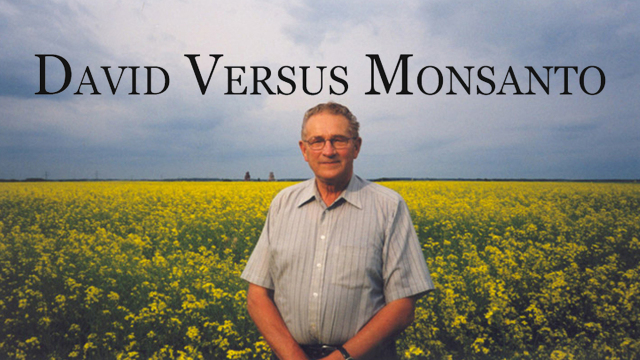 Imagine that a storm blows across your garden and that now, genetically-manipulated seeds are in your crops. A multi-national corporation pay you a visit, demand that you surrender your crops - and then sue you for $200 000 for the illegal use of patented, GM seeds. In this definitive David and Goliath battle, one farmer stands up against a massive multinational, and their right to claim ownership to a living organism.

"We knew by checking license plates that Monsanto or people hired by Monsanto, were watching us constantly", says Percy Schmeiser. When the court ruled in Monsanto's favour, Percy counter-sued Monsanto for environmental pollution, seed destruction and slander. With the crop he had worked on for 50 years officially 'owned' by Monsanto, Percy launched a nationwide campaign defending farmer's rights. Monsanto did everything they could to stand in his way. "Monsanto is big", came a voice down a telephone one night, "you can't win. We will get you. You will pay". Percy doesn't use Monsanto's popular herbicide 'Roundup'. "People have to ask themselves what are they really eating?" Percy asks of an outraged auditorium, "Monsanto said agent orange was safe, are we now to believe them when they say that 'Roundup' is safe?" Percy had no use for the canola seed Monsanto developed to resist 'Roundup'. Yet the court ruled that even if Monsanto's seed is in a crop by cross-pollination, they own the entire crop as a result of their patent. GMO's bring less yield than natural seeds and increasingly toxic food. "The people don't want GMO's, they don't want toxic foods", Percy declares, "but there is no coexistence between GMO and non-GMO- it's just a matter of time before it's all GMO". Monsanto have brought fines from $20 000 to $100 000 against several farmers, completely unaware that Monsanto's canola seed is mixed with their own. "The way the court system in America works is that whoever piles the most money on one side of the balance wins", says Troy. He lost his case against Monsanto after coming up with $400 000 in legal fees. Monsanto gives out leather jackets to farmers who inform on other farmers who they suspect of using the Monsanto seeds. It's a way of eliminating competitors and something, which Percy's wife believes has changed the farming industry for good. "No one trusts anyone anymore", she sighs. Percy appeals the supreme court decision. Whilst they find that the presence of Monsanto seeds in his field does infringe the patent, without exercising the patent by spraying 'Roundup' on his field, Percy is not liable to pay $200 000 in fines. "Today is a personal victory", Percy says with tears in his eyes, "6 years of personal struggle - we fought for the rights of farmers to plant their seed from year to year. We never thought it would come this far". But the court also ruled that Monsanto own the entire plant as a result of placing a gene in it. "The supreme court will have to revisit this judgement", Percy explains undeterred. "their decision means that a corporation can control anything they put their genes into or anything they put their patents on". "We have more questions than answers now", Percy continues, "who owns life?' The definitive documentary on our increasingly genetically modified world. LEARN MORE.
WATCH MORE.
JOIN THE DISCUSSION. AWARDS

THE CHRIS AWARD AT THE 58TH COLUMBUS INTERNATIONAL FILM FESTIVAL 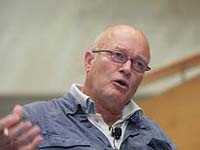 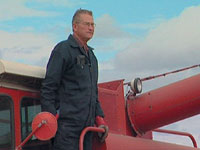 Bertraam Verhaag started making films about GM because he disagreed with the way multinationals were ignoring people's interest in health and the environment. He felt a duty as a filmmaker to draw attention to their undemocratic modus operandi as they decide for us what direction science, democracy, politics, and even food will move in. David Vs Monsanto is just one product of this ideal; others include: Monster Salmon and Butterflies, Designer Babies and Gene Robbery, and Vandana Shiva: Seeds and Seed Multinationals.