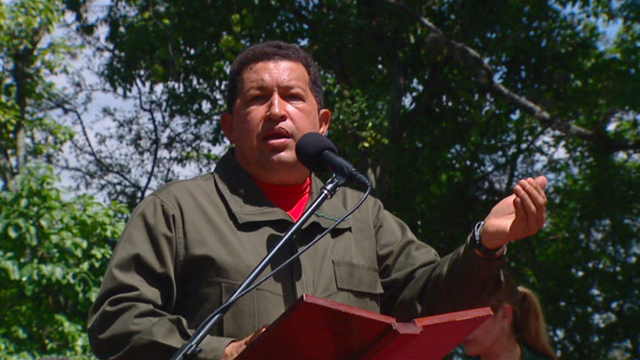 Hugo Chavez is the outspoken champion of Venezuela, thorn in the US's side and saviour of the poor. Now that Bush is gone and capitalism has taken a beating, can Chavez's socialist revolution last?

'Savage, irrational inequality' - Chavez describes capitalism to a captivated crowd. The poor see Chavez as a saint and everywhere he goes red-shirted 'Chavistas follow. But his popularity has always depended upon healthy capitalism. 'High oil prices have allowed Chavez to mask the fact that he has destroyed the economy' says one economist. Whilst the world was buying oil at record prices, Chavez could fund his social programs even as the private sector crumbled. Almost every company he's nationalised has turned into a loss maker and as the recession continues, the extent of Venezuela's problems are exposed. 'Since Chavez came to power, the murder rate has doubled to more than 100 a week' reveals our reporter. Now that the opposition has won control of Caracas in municipal elections, Chavez is showing himself increasingly hostile to cooperation. 'More than 30 hooded men with guns, pistols and machine guns attacked the offices where I should be working as Mayor' says opposition leader Ledezma. Just as unbridled greed has undermined capitalism, Chavez's autocratic socialism is jeopardising the benefits of his revolution.
FULL SYNOPSIS
TRANSCRIPT