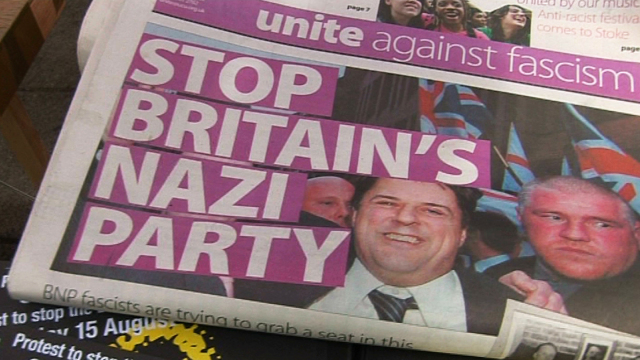 The times may have changed but the whites-only, anti-immigration, stance of the British National Party is the same. With support for the BNP increasing, Britain is facing a move to the extreme right.

'We're the sex pistols of British politics and we've just got a number 1' cries Nick Griffin, leader of the BNP, after winning 2 seats in the European Parliament. Deemed racist by their critics, the BNP is riding a wave to the right in Britain - mainly on the issue of immigration. 'No one minds a bit of immigration' says Derek, a BNP voter from Manchester, 'but this is colonisation'. Until recently the working class men of England's north were the country's core Labour Party voters. Now, they're backing the BNP. 'They're looking at us and saying 'we didn't do anything wrong'', says former Labour supporter Patrick. The recent expenses scandal along with record levels of unemployment has cemented a belief that Labour has abandoned the working class. The BNP has been quick to respond: 'it's stripped away its extremist baggage and presented itself as a radical anti-establishment alternative' explains a leading researcher on extremist politics. Britain goes to the polls early next year. With a fifth of British voters supporting the BNP, a new political landscape is on the cards.
FULL SYNOPSIS
TRANSCRIPT