Fear in the Fast Lane

The secret world of internet hackers 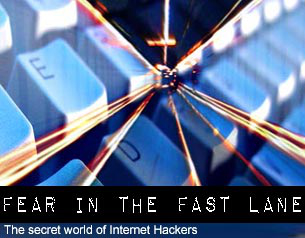 There's little doubt that the internet has changed our lives for the better. Online, we do everything from booking holidays to paying bills. But how easy is it for a cyber-crook to take control of your computer without you even knowing it? This eye-opening doc reveals how you can have your identity stolen, your phone disconnected and your bank accounts emptied in hours.

Whilst logging into his online banking one day Dmitri noticed that one of his accounts had disappeared. "I phoned the bank and they said I'd opted to hide it, but 'don't worry your $7,000 is safe" Dmitri remembers. "In fact there was $80,000 in the account!". A cyber gang were half way through taking over Dmitri's identity. In the following days his mobile phone and internet were disconnected and no one would believe he hadn't made the changes himself. Online crime has got to such a level that a leading figure in online law enforcement believes that "at some stage there will be real debate on the benefit of the internet ... should we switch it off?". One day, the owner of online gaming site 'Multibet' got an anonymous email threat: if he didn't transfer $20,000 into a Russian account his site would be shut down. "Initial thinking was that it was a hoax" remembers Mr Crane. Two days later the Russians launched a cyber attack commanding thousands of computers around the world to attack the Multibet website. Multibet went down. "The overwhelming feeling initially was anger but quickly it became depression and defeat", explains Mr Crane. "We, we were helpless". "These organised crime groups are very sophisticated... but they took too many risks" explains Neil, a manager of High Tech Crimes Operations. The Russian extortionists got eight years jail. It was a notable victory for the police, but a rare one. "The anonymous nature of the attack now makes it more difficult for law enforcement to track these people down," explains Neil. 'Botnets' are the new powerful weapon of choice for cyber crooks. With one click on a website infected by malware, you could become a slave to a central computer, joining millions of other infected computers in what's called a botnet. Not only can all of your information be stolen but your computer can be used to spam millions of people, attack businesses or even countries, without you noticing a thing. "Around one in six computers in Australia is, or has been, a zombie computer, part of a botnet," explains Neil. Cyber criminals or would-be cyber criminals who do end up in court receive lenient treatment. "It seems you're a bit of a nerd" a judge said to 20 year old Brendon Taylor, who attempted to sell over 50,000 replicated credit cards online. Taylor got off with a $2,000 good behaviour bond. Yet these 'nerds' constitute the greatest security threat of our generation. A chilling exposure of the dark side of our technology obsession. LEARN MORE.
WATCH MORE.
JOIN THE DISCUSSION. 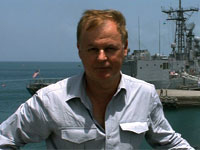 Andrew Fowler has worked for ABC Australia as a foreign correspondent and on the investigative unit for a number of years. This documentary is some of his most recent work for the Four Corners team, prior to which he has written reports such as 'Flying Blind' and 'Jacob Zuma and the French Connection'. Since 'Fear in the Fast Lane', Andrew has written 'A Dirty Business' and won the Silver World Medal this year at the New York International Television and Film Awards in the category of Australian National and International Affairs for his report on Somalia, 'Pirateland'. 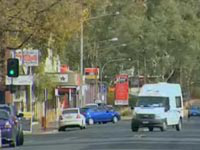 ABC reporter Andrew Fowler tells how foreign internet crooks took down a multi-million dollar Australian business. He explains how you can have your identity stolen, your phone disconnected and your bank accounts emptied in just hours. Perhaps most alarmingly, Four Corners reveals first-hand how wireless connections are an invitation to thieves.