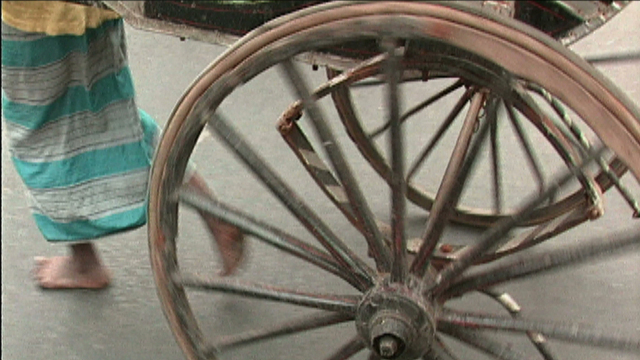 Though not glamorous, the job of a rickshaw driver is cherished by many - but it's under threat, as the city officials push to bring the city into the modern world.

The 100 year-old transporter doesn't look good any more and holds up the traffic. Rickshaw pullers in India have other priorities - the 80,000 drivers have their families to feed. Abdul Rashid has two children, both are small for their age and will not have the chance to go to school. Abdul too is not in good shape. His whole body aches and, like many pullers, he doesn't earn enough to have shoes. His wife complains that he does not bring in enough money. Her hopes of leaving their squalid shanty town hut are fast disappearing. The Bengal Rickshaw Union argues that the rickshaws are good value and the only kind of transport that can traverse the flooded streets during the monsoons. As it is, the city fathers have not been swayed by their arguments. Rickshaw pulling may not be a glamourous profession but for the city's migrants and lowest castes there are very few alternatives. Produced by Marion Mayor Hohdahl
FULL SYNOPSIS
TRANSCRIPT