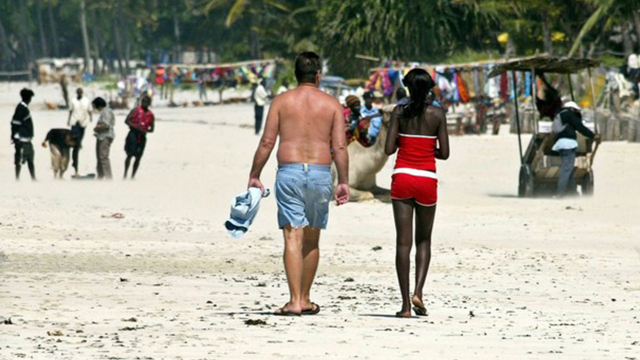 Kenya's stunning beaches attract thousands of tourists each year but this tropical paradise hides a harrowing secret. Children as young as 6 are having to risk their lives and sell sex in order to survive.

As night falls, Mombasa's clubs fill up with European male tourists ogling teenage girls. The desperate teenagers wear high heels and pay a bribe to get in. The ultimate hope is 'Mzungu', a white man who will pay 5 times more for sex, than a Kenyan labourer can earn in a day. Three years ago a study by UNICEF reported that 'approximately 30% of the population of children aged between 12 and 18 were engaged in some form of sex work.' Since this report, political violence and economic crisis has left 10 million Kenyans starving, forcing more youngsters into the sex trade. 'I started when I was 12. I could go into a nightclub and I could count 10 to 20 girls that were prostitutes,' tells 14-year-old prostitute Leyla. 'I ask God, what I have done wrong? I am still a child and I am doing this.' Dr Essam Ahmed works in Mombassa's only sexual health clinic and explains there are many loopholes in the judicial system, 'it's very rare for a perpetrator to be jailed.' And although the authorities say they 'are going to take strict action on those who are taking advantage of young children', the country fears any attack on its reputation could drive innocent tourists away.
FULL SYNOPSIS
TRANSCRIPT