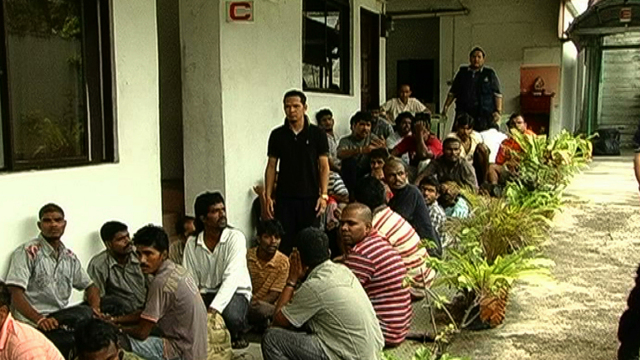 Midnight raids and filthy detention centres are what await illegal immigrants in Malaysia. Australian authorities praise the clampdown, but should they take any responsibility for the migrants' fate?

'My name is Abdu Rahim, number of card 03C13837.' At the Rela militia's headquarters, Abdu is one among hundreds of migrants who have been rounded up that night. They're on their way to Australia which once the root blocked. Cooped up in filthy barracks, detainees are simply left to rot. 'At times we contemplate suicide. But we have the children', cries a Tamil mother. Although Malaysian authorities fiercely deny it, many of the detainees own UN refugee cards. 'Cracking down on people smuggling in itself is not a problem', says David Manne of the refugee and immigration legal centre, 'The question is - what is the consequence of doing that?'
FULL SYNOPSIS
TRANSCRIPT