Berlusconi and the Beautiful 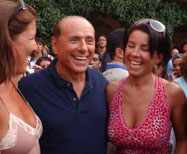 Sex addict, adulterer, 'the cavalier' - call him what you will Berlusconi is Italy's beloved. Are his people simply willing to look the other way or are they prevented from asking too many questions?

"I am proud to be Italian!" shouts Italy's Youth Affairs minister when asked about the prime minister's 'indecent' affairs, "you are playing with our national pride!". Like his ministers, Berlusconi doesn't like people asking questions. He is suing the respected newspaper La Republica for questioning his infamous affairs, his promotion of beautiful women and his disputed 'frequenting of minors'. "One must consider that when this is broadcast, the rest of the world will know more about [Berlusconi's] affairs than the Italian audience knows" says Ezio Mauro, editor of 'La Republica'. Berlusconi's family owns La Republica's main competition and controls 80% of the television market. "I know just one thing, that up until now I'm the only one who's told the truth", says the call girl now famous for bedding Berlusconi. Yet Berlusconi is light-hearted about those scandals that do slip through his fingers. "In my life I have never had to give money for sexual services", Berlusconi announced in response to his ex-wife's accusations, "as someone who enjoys conquering, the greatest joy and satisfaction is the conquest." For all the furore it is common consensus Berlusconi is unlikely to be forced out of power any time soon.
FULL SYNOPSIS
TRANSCRIPT